A whale not seen for 20 years!

We were amazed this summer when we photographed an adult male we didn't recognise and after some searching realised he had last been seen in 1994! Yes, 20 years ago! 9459 is the code it was assigned when first seen and added to the catalogue of Icelandic killer whales existing at the time. Since then it had never been seen again until our first day out in the water this summer. There he was, in a large aggregation of whales just off Geirfuglasker in Vestmannaeyjar.

This incredible sighting shows us some interesting things. First, it tells us he is an old male! Most likely he is at least in his 40s, since he was already a fully grown adult male when first identified in 1994. Second, it shows how little we still know about this population. Unlike populations in other parts of the world, there haven't been dedicated long-term efforts following Icelandic killer whales. Studies first started in the 1980s by the Marine Research Institute, but much of what has been studied about these animals since then has come from opportunistic studies or short-term studies, with dedicated effort for a few years.

Much of the difficulty of studying killer whales in Iceland comes with unpredictable changes in their distribution as they follow their herring prey which changes its location throughout the year and between years. And of course, many locations where whales occur are difficult to access or exposed to weather making working conditions, well, unworkable! This is why it is so important to have as much help as possible! Sighting reports from anyone out at sea that comes across killer whales makes it possible to understand which whales go where.

Of course some animals may be only occasional visitors in Iceland and so will not be seen for long periods of time simply because they are elsewhere. But we don't know if this is the case! Long-term studies and wide coverage make it possible to have an idea of the residency patterns of whales in Icelandic coastal waters that help us answer questions such as that.

And it is not just knowing the whereabouts of whales. By regularly following who is around we can better understand birth rates, mortality rates and we can even estimate how many whales are likely to live in Icelandic coastal waters. All this information help us understand if the population is doing well or is facing any threats. As top predators, these whales play a very important role in the food chain so knowing more about them is crucial to our understanding of the whole ecosystem.

Find out below how you can help! 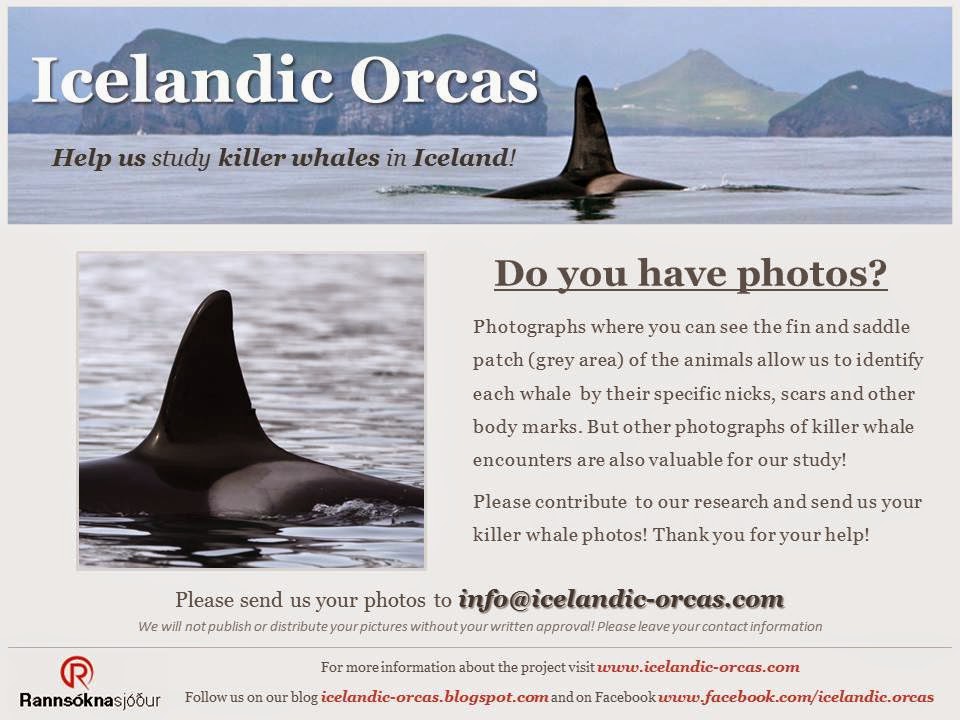 Posted by Icelandic Orcas at 12:46

Icelandic Orcas
The Icelandic Orcas project aims to find out more about the behaviour of killer whales seen in Iceland. Although regularly found near shore we still know little about this top predator and the role it plays in the Icelandic marine ecosystem.